I got some new toys last week and was excited to use them today.  We got eight new “rotational inertia demonstrators” and I plan to use them a bunch for both AP physics 1 and AP physics C.  Today the students in AP physics 1 determined the effect that the distribution of mass on a heavy pulley has on its angular acceleration.  The four rods on the heavy pulley have masses that can be moved along the rods to change their distance from the axis of rotation.  The students used the same hanging mass for each trial, moved the masses on the heavy pulley for each trial, and measured the time it took for the hanging mass to reach the table top after it was released.  After they calculated acceleration of the hanging mass and angular acceleration of the pulley they made graphs of angular acceleration vs. radius of the adjustable masses.  They got really nice inverse function curves and I look forward to using the results to introduce moment of inertia next week.

After the students learn the math involved they will be asked to graph their data so the slope of the graph is equal to the mass of the adjustable masses.  I tried it myself last week and it came out pretty well with less than 10% error.

I was unexpectedly absent for four days and then spent two more days playing catch up.  Here is a brief synopsis of what we did.

Day 95: Discussed and reviewed angular motion and kinematic concepts and problems from days 92 and 93.

Today we discussed and worked through several examples of static equilibrium problems as a class using the following process.

1. Determine the external forces on the system and draw them on a free body diagram with the force vectors drawn at the appropriate location on the system.

3. Choose an axis of rotation and write equations for rotational equilibrium.

I set most of the problems up as classroom demonstrations that we could test after we solved.  The kids always enjoy the ninja on the plank and determining how far out he can walk before it tips. 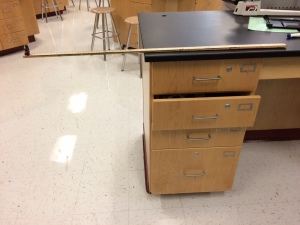 Overall I think it went well and tomorrow they will get a chance to apply their knowledge of rotational equilibrium to a graphical analysis lab.

Today we started second semester and AP physics 1 is starting a new unit on torque and angular motion.  We are beginning with static equilibrium and today the students investigated the torque balance.  I had them get a meter stick to balance at its center of mass and then play around with masses hung on either side.  The students recorded mass 1, mass 2, distance 1, and distance 2 for each trial they completed and were asked to look for trends.  I let them play for about fifteen minutes.

After that we tried opening the classroom door by pushing on different locations on the door.  Once again the students picked up that the farther they were from the axis of rotation the less force it took to open the door.

We spent the last twenty minutes of class defining torque and static equilibrium.  We drew a free body diagram of the system and used it to prove that in fact m1r1 = m2r2.  Tomorrow we will practice some problem solving!

As we all know, life gets hectic between Thanksgiving break and winter break.  I completely dropped the ball on the blog for fifteen days.  I should go back and do an entry for each day but that just isn’t going to happen.  Here is how we finished up second semester:

Today the kids white-boarded their conservation of momentum homework problems. 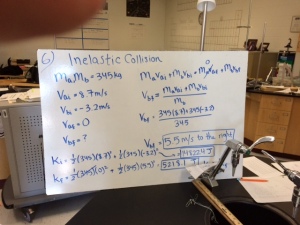 They did a good job keeping up with the positive and negative values for the velocities and evaluating the change in kinetic energy for each collision.

After that we looked at another video I made for tracker but did not work out well.  I tried to have two carts shoot apart due to a spring in between them but the force was not applied horizontally and a lot of jumping and bumping in to the air track occurred.  We watched the video and discussed the reasons the numbers did not work out as intended, which was a good discussion.

I made up a problem that was similar to the set up for the video and challenged the kids to solve it using both conservation of momentum and conservation of mechanical energy.  They struggled, but eventually about half of them were able to get it.  One of the students explained it on the board for the rest of us at the end of class. 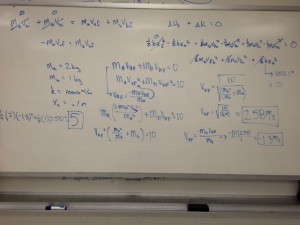 Have a good Thanksgiving everybody, I’ll be back blogging again in December.

On November 20th we began class by reviewing the final vleocities and change in kinetic energy for cart collision videos 4, 5, and 6; the perfectly inelastic collisions.  The students did a good job answering for vf in terms of vo and determining the ratio of kinetic energies based on the symbols given.  I hope it was a beneficial exercise for them.

After that we discussed elastic collisions and I derived the equations to determine both vf’s based on conservation of both momentum and energy.  I don’t expect my students to derive those equations but we used them to analyze theoretical values for cart collision videos 1, 2, and 3.  The relative velocities we calculated agreed with the numbers the students generated in tracker and I hope that the time spent on those collisions has developed a deeper conceptual understanding.

Finally, we talked about plain old inelastic collisions and the students had five problems to try for homework.  For each one they had to solve for a missing velocity and then determine the pre-collision and post-collision kinetic energy to evaluate the collision type.  They will white board tomorrow.

Today my students presented their findings from the Tracker lab yesterday.  Here is an example:

The results worked out pretty well, but not perfect.  Video 2 should have been an elastic collision with no change in momentum or kinetic energy.  This group got a loss of about ten percent of their momentum and about twenty percent of their kinetic energy.  The results were pretty typical for the three elastic collision videos.  We discussed the real world vs. the ideal world and decided as a group the values were close enough to call them both conserved.

For the three completely inelastic collisions we also got small decreases in momentum but very large decreases in kinetic energy.  All students agreed that the momenta were close enough to call them equal and the kinetic energy showed a substantial decrease.

After the lab discussion we took some brief notes on why momentum is conserved for collisions and derived equations for completely inelastic collisions.  I gave my students three problems for homework similar to the lab videos that required them to answer in symbols. 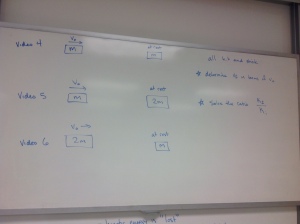 We’ll see how they do tomorrow!

The students were given the following instructions.

2. Determine the initial velocity of each cart.

3. Determine the final velocity of each cart.

4. Determine the initial momentum of the system.

5. Determine the final momentum of the system.

6. Determine the initial kinetic energy of the system.

7. Determine the final kinetic energy of the system.

8. Determine the % change of both the momentum and kinetic energy.

Tomorrow the students will present their findings on whiteboards.  We’ll see how it turns out!

On Monday, November 17th,  we went over the basic homework problems, which did not take much time.  The students seem to have a good understanding of the concepts and applying the basic formulas for momentum, impulse, and the impulse momentum theorem.

After that we determined the momentum and kinetic energy of a system of two masses with different velocities.  The students will need that skill for a conservation of momentum inquiry lab tomorrow.

Finally, I gave the students this problem: 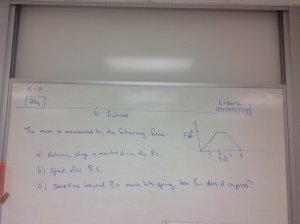 Most of the students did a pretty good job with the problem working through it together on their whiteboards.  Here is an example: 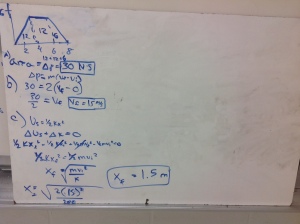 Hopefully by continuing to assess energy concepts in class along with momentum the students will get better with conservation of energy.  I am still not happy about the test last Thursday.